What a week it has been for WestConnex – with the release of a damning report by the National Auditor General, the arrival of the Minister for WestConnex in the NSW Parliament, and Labor supporting a Greens motion in the Senate condemning the Federal Government for lack of governance in expending federal funds for the project.

Meanwhile on the ground the cowboys at the Sydney Motorway Corporation continue to bulldoze through without any regard for safety or compliance.

If there was ever a time to step up our efforts to stop this private polluting tollway from destroying our neighbourhoods, polluting our air and slugging us with exorbitant tolls it is NOW.

Here’s three things you can do right now to support the ever-growing community campaign against WestConnex:

“The report shows that the rationale for funding this project was deeply deficient. It points the finger at both the Liberal Coalition and Labor, because they were pushing the WestConnex project well before even an initial business case was presented to the appropriate government departments," says Ms Leong.

NSW Premier Gladys Berejiklin announced her new cabinet today, with the extraordinary announcement that a stand-alone ministry has been created for WestConnex.

Media Release: Time for WestConnex to be history like Baird

Now that Baird is opting out of politics, his centerpiece project needs to be stopped.  Since he and Tony Abbott turned the first sod of this toxic project back in March 2015, community opposition has continued to grow.

Public criticism of WestConnex, billion dollar budget blowouts, shonky, secretive planning and huge contracts to companies under federal police investigation, have all played a significant role in the declining popularity of Premier Baird, according to Greens Member for Newtown Jenny Leong MP.

More community members have been aggressively handled and violently arrested at Sydney Park as peaceful protests against WestConnex continue. The use of force and the subsequent charges laid show that the police are using the powers of the Baird Government’s new draconian anti-protest laws.

“I have serious concerns about the level of police aggression and violence that’s occurred in recent days at Sydney Park.

“Local police, the riot squad and plainclothes police - some wearing leather gloves and refusing to display their name badge - have used disproportionate force against peaceful community members showing their opposition to WestConnex.

At the last Inner West Council meeting of 2016, the Administrator Richard Pearson committed to spending half a million dollars toward modelling the impact of WestConnex on local streets and neighbourhoods.

“This is a welcome initiative and shows that local government shares the community’s concerns about how badly WestConnex will impact our neighbourhoods, said Jenny Leong MP, Member for Newtown and NSW Greens spokesperson on WestConnex.

“The RMS only plan to look at the impact of WestConnex 12 months after each stage has been opened - well after the traffic chaos and air quality impacts have occurred.  Premier Baird’s appointed Administrator has called this wait-and-see approach, ‘totally unacceptable and inconsistent with the principles of modern environmental impact assessments’ and he should know, as he has come directly from the NSW Planning Dept.

RMS has announced plans to radically alter key local roads between Alexandria to Moore Park and they have put these plans forward without indicating that they are obviously the result of the impact that WestConnex will have on traffic in this area.

Jenny Leong MP, Member for Newtown and NSW Greens spokesperson on WestConnex has condemned this announcement .

"It’s obvious that this work is directly related to WestConnex and the St Peters interchange - attempting to provide a stop gap solution to the widely discredited plan that would put 70,000 more cars into the area.

"The pathetic attempt by RMS to try to pretend these works are stand alone so the true impact of WestConnex is hidden, will not fool anyone.

"This announcement of rushed community consultation by RMS on major roads work between Alexandria and the Moore Park Road corridor yet again demonstrates contempt for public input.

"The fact that RMS has announced these major works and the carving out of a highway between Sydney Park and Moore Park before we’ve seen any plans for the Sydney Gateway or the M4/M5 tunnel is outrageous.

"The Premier must call a halt to all work on the St Peters interchange until an integrated, well researched and sustainable plan is developed - not this rogue road building frenzy the current Minister is allowing on his watch.

NEWS: WestConnex Planning on the Run and Open Letter to the Premier

All local community campaign groups, Greens and ALP state and federal politicians, Lord Mayor Clover Moore and other individuals and organisations, have signed onto an Open Letter to the Premier, the Planning Minister Rob Stokes and Roads Minister Duncan Gay, demanding a review of WestConnex and an immediate halt to all work on the proposed St Peters Interchange.  Over 1000 people signed the Open Letter in the first day.  You can add your signature here.

Planning on the Run

The Baird Liberal National state government has fast-tracked radically altered plans for the Stage 3 M4-M5, announced tunnelling on the New M5 from St Peters and been strongly criticised by the NSW Auditor General for the Sydney Light Rail planning and budgeting – which was compared to the problems the Auditor General highlighted with WestConnex back in December 2014.

Recently the Sydney Motorway Corporation added another kilometre of Stage 2 tunnel from Rozelle to the Iron Cove Bridge and major changes to the Rozelle Interchange.  Now planning for the Stage 3 M4-M5 9 km tunnel has been fast-tracked and it’s been widened to 8 lanes.  The Camperdown portals onto Parramatta Road have been scrapped and the route has been moved further west.  This is good news for Camperdown and Glebe residents as they now won’t have tens of thousands more cars from WestConnex feeding onto Parramatta Road or 30 metre high pollution stacks right in the middle of their suburbs.

But this change will just shift the traffic chaos and pollution elsewhere to St Peters, Alexandria and Newtown.

Preparatory drilling along the proposed route has occurred over the past few weeks but we won’t know the exact route till the EIS is made public in the first half of 2017.

What we do know though, is that this major project is being planned on the run and that all the traffic and air modelling and the business case details are now inaccurate due to these changes since the Stage 1 and Stage 2 EIS plans were approved by the NSW Planning Minister.

Just this week I've met with the Premier and concerned community members and again called on him to immediately step in and stop all WestConnex works and set up an independent review, particularly in light of the way the project is now being planned on the run.

Premier Baird must put a halt to this out of control mega-road and insist on a review now.

Member for Newtown and NSW Greens spokesperson on WestConnex Jenny Leong MP,  is again calling on the Premier to immediately step in to halt all WestConnex works until an independent inquiry can be undertaken, as the Roads Minister announces further changes to the $16.8 billion dollar project on the run.

"With this latest announcement of WestConnex changes there's some good news and some bad news, but one thing is very clear - the Roads Minister is making it up as he goes", she said.

"The good news for Camperdown – and for the Royal Prince Alfred Hospital and the University of Sydney - is that the exit/entry ramps have been scrapped with the M4/M5 tunnel link being moved further west. 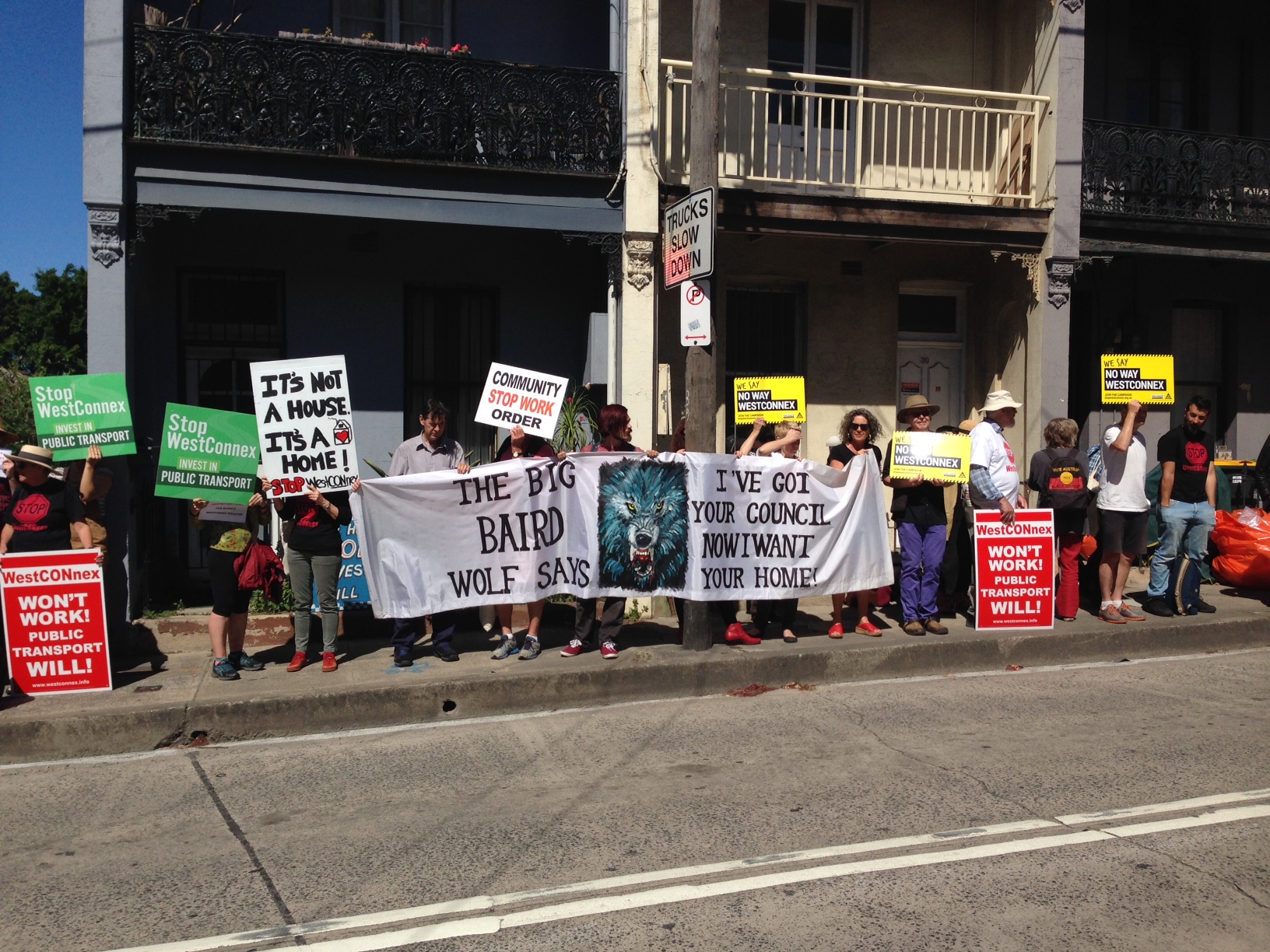