WestConnex is a 33 kilometre toll road that will extend from the M4 in Sydney’s west, through the inner west, and onto the new M5 in Sydney's south west. Most of WestConnex will be a series of underground road tunnels and at present, is forecast to cost $16.8 billion dollars. That's over half a million dollars per metre.

As the most expensive transport infrastructure project in Australian history, it is disgraceful that public funds of this order will not be used to build the robust public transport network that Sydney needs. 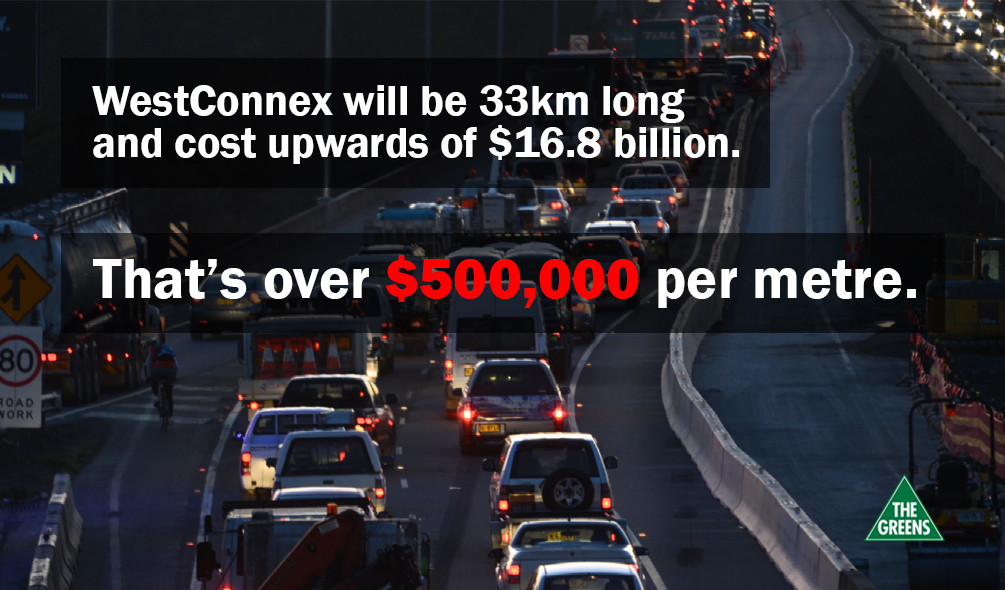 WestConnex flies in the face of all international urban planning developments which show that more roads create more traffic and congestion. This dirty tollroad will only line the pockets of private toll road operators and construction companies. It will subject communities to serious health risks, loss of homes and green spaces, untenable tolls, and continuing traffic congestion for decades.

The Greens oppose WestConnex because of the negative social, environmental and economic impacts it will have on our communities for generations to come. We oppose the compulsory acquisition of people's homes for this dirty tollway and the destruction of precious parklands and green spaces. What we do support is the redirection of public funds into sustainable public transport.

The Greens are the only party in parliament that has consistently spoken out in opposition to WestConnex.

The Government and Opposition in both NSW and federal parliament continue to support the building of Westconnex, even though it has been proven that public transport—not dirty tollways—are the answer to our transport needs.

Given the growing list of failed toll roads around the country, one would assume a project of this size and cost would have undergone rigorous planning and budgeting, and breezed through independent review mechanisms with regards to the concept, business case and tendering processes from the concept stage. However, the reverse has been the case, as highlighted by the NSW Ombudsman's report and the City of Sydney's independent report. Billions of dollars worth of contracts were signed before planning approvals and updated business cases were released.

When the NSW Liberal government and then federal Labor government announced WestConnex in 2012, it was done so with the recommendation of Infrastructure NSW, which hailed WestConnex as Sydney's next motorway priority set to cost a total $10 billion. The project was originally slated to include a Sydney Airport Access Link and a link to Port Botany, but neither of these exist in the current iteration of WestConnex, even though the cost of the project has blown out by an additional $6.8 billion.

WestConex is now being overseen by the Sydney Motorway Corporation (SMC) which is a public-private corporation set up in 2014 to secure finance and manage ongoing project delivery. Funnily enough, two high-ranking government ministers also happen to be SMC shareholders. SMC also does not fall within the GIPA Act, so the project's internal workings have remained highly opaque.

Close to 30,000 submissions have been received against WestConnex, but despite the fact that the project has no public mandate, it's likely plans for the new M5 will also be approved soon. The Greens strongly condemn the way thousands of objections against WestConnex have been virtually hidden on the NSW Department of Planning's website.

The federal Coalition government has committed $3.5 billion in grants and concessional loans to WestConnex, even though numerous independent reports and reviews commissioned by local councils have shown serious flaws with the project. The SGS report into the Updated Business Case provides a particularly damning critique of the economic and financial claims made in favour of this expensive, dirty toll road.

At this stage, WestConnex is set to cost $16.8 billion, but it's likely this figure may swell again. The government plans to source $1.8 billion in state funding, $3.5 billion in federal funding, and the rest from the sell-off of Stages 1 and 2 as well as long-term tolls.

The following banks have entered into seven-year project loans to back the development of WestConnex: CBA, Credit Agricole CIB, NAB and Westpac. A number of superannuation funds are also shareholders in Transurban, which is the forefunner in the bid to own a controlling stake in WestConnex and other dirty tollroads throughout Australia. That's why we're calling on our supporters to write to their super funds today and tell them: #DontSuperFundWestConnex.